Unlock our knowledge about alternative energy and renewable technologies - now!

It is scandalous that much of our collective knowledge about alternative energy and renewable technologies is kept locked behind an Elsevier paywall! This is one area where clearly everyone anywhere on the planet with the inclination to read about the possibilities and push for solutions, whether through developing more basic knowledge or transferring knowledge to the business sector, should have immediate, barrier-free access. This is one area where the need is too great to permit for ANY embargo period.

Science works in step-wise fashion, like a detective mystery. One scientist discovers a clue; another builds on the discovery, until we have a new body of knowledge or real-world implementations, or both. If a useful discovery sequence takes six steps, with about 6 months of research for each step, then with no embargoes, the process takes 3 years. With a one-year embargo at each step, the whole sequence takes 9 years (3 years for research, 6 years for embargoes). Consider the impact of 6 more years of increasing greenhouse gases on climate change, and it is easy to see why the public good of rapid advancement in this area far outweighs an outmoded, print-based business model.

Here are the 29 journals Elsevier publishes in this area, from this page:

Posted by Heather Morrison at 8:43 PM

First, there is the question of whether the current push towards quantitative metrics makes any sense at all. I have talked about the problems of this kind of instrumental rationality is my book chapter,  The implications of usage statistics as an economic factor in scholarly communication https://circle.ubc.ca/handle/2429/954 (In brief, usage stats are likely to have significant negative impacts, from discouraging use to discouraging important but not necessarily popular entire fields of research); and the second chapter of my draft thesis http://pages.cmns.sfu.ca/heather-morrison/chapter-two-scholarly-communication-in-crisis/ (search for irrational rationalization).

One example, from an interview study of scholarly monograph publishers I did recently, is the impact of pushing scholars to publish more books to obtain tenure. This pressure is not consistent with the time it takes to write books that are really worth publishing and reading; so in this instance, we have a quantitative metric intended to improve quality and productivity (of our academic staff) which appears to be lowering quality (more mediocre books, more book production when the problem for all of us is not enough reading material, but rather not enough time to read).

Research, both quantitative and qualitative, is my recommendation before putting too much stock in Total Impact or other alternative metrics as a replacement for Impact Factor in evaluating the quality of scholarship. Note that I do not recommend retaining Impact Factor, but rather minimizing or eliminating quantitative approaches to evaluating the quality of scholarship.

The use of social networking tools may be particularly problematic. One research area that I recommend is examining the effects of traditional biases. I would hypothesize that social networking tools would be likely to exhibit the following biases prevalent in modern society:
In addition, I would suggest that metrics based on social networking tools could easily be manipulated, not only by authors but also by interested others. It doesn't take much to imagine corporate polluters in favor of climate denial upping the impact of their preferred pseudo-science, or for drug companies to drive up the impact of studies making the drugs that they sell look good.

Another area to consider (for all kinds of tools, not just social networking tools), is the impact of funding considerations. If universities are relying more on corporate funders at a time in society such as today when the political will seems to be on the side of the wealthy who wish to cut spending on social justice, it is reasonable to hypothesize that there will be a smaller proportion of funding for social justice issues. What happens to research on poverty issues and its impact if there is less funding for research and academic positions in this area (hence fewer researchers), at the same time that there is less funding for government services and social workers (fewer potential readers and tweeters), and many of those poverty research is meant to help have lost their homes and jobs and may find it difficult to get internet access?
Posted by Heather Morrison at 7:57 PM 7 comments:

This week British Columbia is mourning the passing of notable citizen and philanthropist Irving K. Barber. This post celebrates a small part of the achievements made possible by his generosity, the Small Business Accelerator program of the Irving K. Barber Learning Centre.

The Small Business Accelerator program is a highly innovative program and partnership of the University of British Columbia with BC's public and other libraries and the BC business community.

Business success depends on obtaining access to reliable information. The Small Business Accelerator is curated by business librarians and is your gateway to freely available business information, education, and assistance that is both current and trustworthy.

It is my hope that this small token of appreciation will encourage others to consider this model of cooperation, which is also a great model to illustrate how libraries and the business community can work together cooperatively, making use of open access resources, to benefit business and local communities (by making business accelerator programs available throughout the province.

[Disclosure: the Irving K. Barber Learning Centre is a key partner of the BC Electronic Library Network where I serve as Coordinator].
Posted by Heather Morrison at 9:40 AM 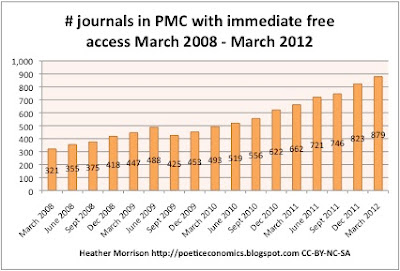 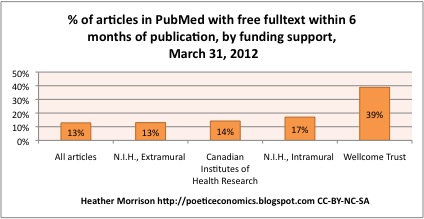