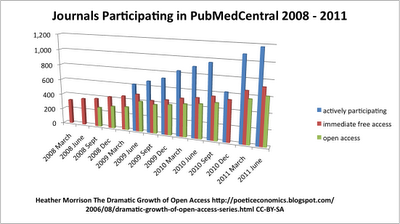 Update July 5, 2011 - that there are now more than 10,000 OJS installations (thanks to Kevin Stranack), up more than 1,000 installations for 10% growth (40% annual equivalent) this quarter; also note one addition to the section on competition below. Update July 1, 2011 - correction: note that Palgrave MacMillan is offering hybrid open access, not a full OA journal as I had thought. Thanks to Roddy MacLeod. See below for further reflection and a link to Roddy's post.

This issue briefly highlights and celebrates the accomplishments to date of open access to the medical literature, and explores whether open access has already begun a new phase of competition that will accelerate growth yet again.

In the 1990's when I worked at a small university college, access to the medical index Medline was on a for-pay basis, something we could not afford, certainly not to offer on a routine basis to students. The first major success story of open access to the medical literature was when the U.S. National Library of Medicine made the index available for free as PubMed. Today, not only is the index available for free, we can also connect directly with 3.3 million of the articles indexed for free, too. The Public Access Policy of the N.I.H. is definitely a factor. Visible compliance with the strong April 2008 policy, by my calculations, is now 72%. 1,176 journals are voluntarily contributing content to PMC; of these, a majority, 616 journals, are open access. 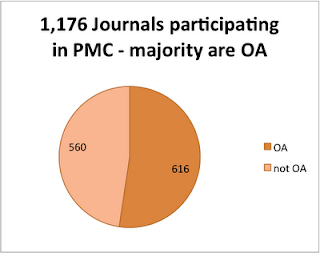 From pioneering to consolidation - to competition?

Laakso, M. et al (2011) published a major study in PLoS One, illustrating a tenfold increase in open access journal publishing from 1993 to 2009. The authors interpret the data as illustrating three phases of open access journal publishing in this period: The Pioneering years (1993–1999), the Innovation years (2000–2004), and the Consolidation years (2005–2009).

This issue of The Dramatic Growth of Open Access includes a preliminary exploration of a thesis that OA journal publishing may have already entered a new, most welcome phase: the Competition Years (2010 - ). A few comparisons are included - to spur the competition along!

Selected numbers
Competition, anyone? This section looks at the best sources for lots of quality free content - documents and journals, acknowledging that this is the tip of the iceberg and welcoming cooperation - or competition - in tracking and assessing sources.

Following my open research approach, this argument is presented for review and critique. The basic idea is that the momentum of the open access movement already has, or soon will, create a critical mass that will transform all of scholarly publishing into a default open access position. The work of Laakso, M. et al. (2011), and my own Dramatic Growth research project, demonstrates consistent strong to dramatic growth of open access from 1993 to the present time. Laakso et al paint a picture of consistent growth, the Consolidation Years, up to 2009, while my perspective is that since this time frame, the landscape for scholarly publishing has changed in some significant ways.

One key change is that the competition tables have turned; in the early years, it was the open access publishers competing against the traditional subscription-based publishers, but today, there is a growing pool of traditional subscription-based publishers actively competing for what they obviously see as an open access marketplace. As noted above, Springer Open recently launched their 50th journal. At inception, Public Library of Science aimed to compete with the likes of Nature and Science; starting this month, Nature's new journal, Nature Communications, is actively and obviously competing with PLoS ONE, now the world's largest journal. Other traditional publishers that have come out with what appear to be serious efforts at competing in an open access environment includes Wiley, with Wiley Open. These are all fully open access journals. It is important to distinguish this from the tendency to develop hybrid open access journals, which is also growing, with Palgrave MacMillan a recent entry into this somewhat open environment. Thanks to Roddy MacLeod for pointing out some of the deficiencies of this hybrid environment in his post Subscription journals with open access content. In brief, the difficulty for readers to locate this information suggests minimal advantage for authors publishing in these venues as compared to publishing in fully open access journals, or publishing in subscription-based journals and self-archiving at no charge, and the likely dangers of double-dipping (increasing costs as libraries pay for subscriptions and additional payments are made for article processing fees), suggests that this model holds little promise for readers, authors, libraries, or, in the long term, journals and publishers. This model may well be useful for journals and publishers in the short term as a means of developing procedures to move towards full open access, but my view is that hybrid OA journals is not a sustainable model for the long term. Rather, hybrid approaches may be best viewed as like using training wheels to learn to ride a bike; helpful to get started, but the sooner they come off, the better.

In addition to the entry of traditional publishers into open access, a recent news release by the Howard Hughes Medical Institute, the Wellcome Trust, and the Max Planck Institute announced plans to develop a new open-access journal aiming to compete at the top tier. It is noteworthy that not only is this a new journal; this is a whole new type of publisher. Update July 5th: just days after the HHMI/Wellcome Trust/Max Planck announcement, traditional publisher the Royal Society announced their new fully open access journal, Open Biology, which appears to be following very much the same model - full OA, rapid publishing, scientific experts in charge of the editing process. Good luck to both!

Another example of a new journal that appears highly likely to be a serious competitor in its field, a publication of a well-established society in an emerging field, is G3: Genes, Genomes, Genetics. To me, it seems only natural that a new journal will be open access, and I expect that this trend will increase in the coming years. A few years ago, the default for new journals was a subscriptions basis. Today, this just doesn't make any sense. An online-only journal with no authentication mechanisms speeds up dissemination, and costs less. Besides, with library budgets already tied up in the big deal, what chance does a new subscriptions-based journal have?

Some preliminary research I reported on in March in the post Those ACTIVE! Open Access Journals illustrates that at least some relatively recent open access journals and publishers already have a higher rate of journal retention (still active after a few years) than some of the top names in traditional publishing.

To wrap things up, it looks to me like we can not only expect the current OA momentum to continue, but that are forces already at play that are likely to accelerate the transition to OA as default: movement by traditional publishers to compete in the open access environment; logic favoring open access for new publications; and as the move continues to open access, we should anticipate that some of the increase will come from diversion of articles from toll to open access venues. One of the implications for libraries is that when signing a long-term contract with a publisher, it is a good idea to remember that you are purchasing access to articles that have not yet been published - and may never be published, at least not by that publisher. Language protecting yet in case the publishers' product diminishes is advised.

ROARMAP's Green Open Access Mandates Pass the 200 Mark. Note that this is not counting thesis mandates.

This post is part of the Dramatic Growth of Open Access series.
Posted by Heather Morrison at 7:39 PM

According to this article in the Economist, last year Elsevier made $1.1 billion in profit last year, for a profit margin of 36%. Most of Elsevier's revenue, and hence profit, comes from academic library budgets.

Faculty have largely been shielded from the economic impact of this profit-taking from my academy, and to date most discussions about faculty publishing choices have focused on the academic freedom of faculty to publish where they please.

Is it timely to bring the economics home to faculty in a more direct way than pointing out the impact on faculty budgets? If a university were to cancel a $2 million a year Elsevier contract, this money could be redirected, couldn't it? Why not redirect $1 million a year to affordable / sustainable options such as open access publishing, and the other half to academic salaries? $1 million a year could fund 10 academic positions at $100,000 a year - or give 1,000 faculty a $1,000 a year raise.

If faculty were to see things this way, I wonder how many would agree with me that a flourishing open access scholarly publishing system is actually the optimal system for academic freedom?
Posted by Heather Morrison at 1:02 PM

The systematic posting of manuscripts, for example because of a mandate to post, is only agreeable if done in ways that are sustainable for the underlying journal. From: https://mx2.arl.org/Lists/SPARC-OAForum/Message/5878.html.

Comment: if universities are considering mandates and economic sustainability for scholarly publishing, why not include a mandate supporting economically sustainable publications / publishers? For example, why not direct tenure and promotion committees to give added weight to affordable / open access publishing choices, if an author indicates that they have rejected high cost / poor access choices?

Would Elsevier survive such a mandate? Aside from high costs, Elsevier appears to be showing a lot less adaptability than other commercial publishers, such as Springer, Wiley, Nature, now Palgrave MacMillan, all of whom now have what appear to be full and serious open access options. Indeed, it seems that a very large percentage of the commercial scholarly publishing sector is poised to be competitive in an open access future, with Elsevier being the exception. My conclusion is that if economic sustainability for scholarly communication is mandated - as I would argue that it should be - and Elsevier continues to show little or no ability to adapt to the current environment, Elsevier's days are numbered. And this may be a good thing.
Posted by Heather Morrison at 12:34 PM