Arguably the best indicator of the global collaborative growth of open access, whether through archives or publications, is the ongoing impressive growth of what we can access through the Bielefeld Academic Search Engine, which surpassed two major milestones in 2016: over 100 million documents (about 60% open access) and 5,000 content providers. The growth rates (22% for documents, 27% for content providers) are particularly impressive given the high pre-existing content rate. This is amazing success not just for BASE, but for all of us. If you've published a thesis through an institutional repository that allows for metadata harvesting, or published an article in a journal that contributes article-level data for metadata harvesting, your contribution is reflected here. This is a meta-level indicator of our global success. 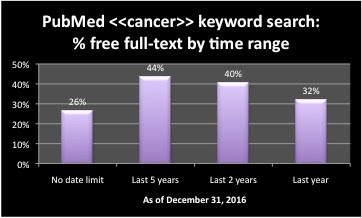 I've added a new metric for medical open access, a keyword search of PubMed for "cancer" for articles with no date limit, last 5 years, last 2 years, and last year, further limited to free fulltext to determine the percentage of items for which fulltext is available. This ranges from 26% overall (no date limit), to 40 - 44% for items published in the last 2 - 5 years, to 32% for articles published in the last year.


Also added this quarter: OECD iLibrary - with more than 11,000 free books, this one publisher's OA collection is nearly double the size of the 167 publishers included in the impressivley growing Directory of Open Access Books! arXiv, in addition to an over 10% growth rate last year, inspired the recent development of two similar services, socArXiv and bioRxiv, newly added to facilitate future growth tracking. The DOAJ get-tough inclusion policy and March 2016 major weeding means the DOAJ count for titles, countries and journals searchable at the article level are all down from last year, while articles searchable at the article level through DOAJ continued to show robust growth of 13%. DOAJ's quarterly growth is back to an impressive rate of just under 3 titles per day. RePEC surpassed a milestone of 2 million downloadable items this year, while Internet Archive surpassed 3 milestones: there are now more than 3 million video and audio recordings, and more than 11 million texts (the number of IA web pages archived is way down, by the billions - such a difference it strikes me as likely due to a glitch in counting, whether before or after). Recently Open Journal Systems announced that OJS is now used by more than 10,000 active journals which <

Kudos and thanks to everyone in the open access movement - every researcher, author, editor, publisher, archive manager, librarian, policy-maker, and activist who is making open access happen. What of 2017? My advice: let's remember the beautiful vision of the potential unprecedented public good of open access - forged not at a time of peace and certainty, but rather within months of the trauma of 9/11 - repeated below - and keep on making it happen.


An old tradition and a new technology have converged to make possible an unprecedented public good. The old tradition is the willingness of scientists and scholars to publish the fruits of their research in scholarly journals without payment, for the sake of inquiry and knowledge. The new technology is the internet. The public good they make possible is the world-wide electronic distribution of the peer-reviewed journal literature and completely free and unrestricted access to it by all scientists, scholars, teachers, students, and other curious minds. Removing access barriers to this literature will accelerate research, enrich education, share the learning of the rich with the poor and the poor with the rich, make this literature as useful as it can be, and lay the foundation for uniting humanity in a common intellectual conversation and quest for knowledge.


Selected numbers and growth by service:

Highlights: in March 2016 DOAJ removed more than 3,000 journals, reflecting a new get-tough inclusion policy. All journals that had not gone through DOAJ's new application process were removed. As a result, in spite of robust quarter since the removal process, most of DOAJ's key data are lower at the end of 2016 than at 2015, with the exception of number of articles searchable through DOAJ which grew by 13%.
Electronic Journals Library
OECD iLibrary  * (selected data points) (just added, no growth figures)
Directory of Open Access Books
OpenDOAR

* OECD iLibrary statement on free-to-read (from About page):


All book and journal content is available to all users to read online by clicking the READ icon. Read editions are optimised for browser-enabled mobile devices and can be read online wherever there is an internet connection - desktop computer, tablets or smart phones. They are also shareable and embeddable.
The site also features content for all users to access and download such as the OECD Factbook, OECD Working Papers, Indicators, and more.
Subscribers benefit from full access to all content in all available formats.


SocArXiv, the open access, open source archive of social science, is officially launching in beta version today. Created in partnership with the Center for Open Science, SocArXiv provides a free, noncommercial service for rapid sharing of academic papers; it is built on the Open Science Framework, a platform for researchers to upload data and code as well as research results


bioRxiv (pronounced "bio-archive") is a free online archive and distribution service for unpublished preprints in the life sciences. It is operated by Cold Spring Harbor Laboratory, a not-for-profit research and educational institution. By posting preprints on bioRxiv, authors are able to make their findings immediately available to the scientific community and receive feedback on draft manuscripts before they are submitted to journals.

Posted by Heather Morrison at 4:16 PM