2014 Dramatic Growth of Open Access: 30 indicators of growth beyond the ordinary 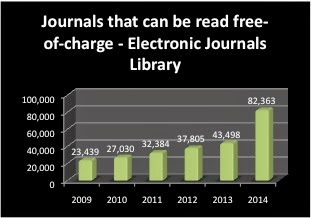 This issue of the Dramatic Growth of Open Access highlights 30 indicators of open access growth that are beyond this background growth of scholarly works - in many cases far beyond, with a range of percentage growth from 5 - 89%. In some cases, high percentage growth reflects early start-ups (low starting figures), but in other cases there are very high growth rates on resources that were very, very large to begin with (these are the highlighted numbers below). Note that some numbers are rounded for ease of understanding; if precise numbers are required, please download the full dataset from the DGOA dataverse. 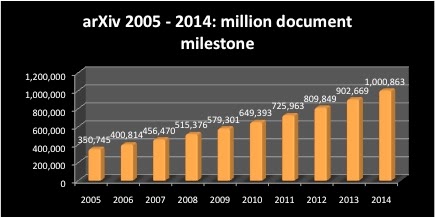 A special congratulations is in order to arXiv for recently surpassing the milestone of over 1 million documents. Note that these 30 indicators likely underestimate the growth of open access beyond the ordinary by a large factor, as this series focuses on just a few indicators of macro level growth of open access. To continue the momentum in 2015 open access advocates are encouraged to remember the vision of open access as unprecedented public good and not get caught up in the minutiae of implementation. Although the focus of this series is the numbers, a special mention to an exceptional open access policy recently announced by India's departments of Biotechnology and Science and Technology which represents a new model OA policy for the whole world.


Open access indicators with percentage growth above the 3.5% background growth of scholarly works in 2014
For full data, see the Dramatic Growth of Open Access Dataverse: http://dataverse.scholarsportal.info/dvn/dv/dgoa

A call to remember the vision of open access in 2015

As open access moves further and further from idea to reality, it's all too easy to get caught up in the minutiae of implementation: the procedures of developing open access archives, journals, books and other works and the development of the technology and services to make it happen, and to make the works attractive to use. In the process of developing OA initiatives, it may well be useful to develop and implement a variety of standards, new metrics and technical procedures. But in the process let's not confuse the means with the ends - let's keep our rationality rational (Morrison, 2012) and focused on the goals that we really want to achieve.

To further grow the momentum in 2015, let's remember the great vision of open access, as expressed in the first paragraph of the 2002 Budapest Open Access Initiative:

An old tradition and a new technology have converged to make possible an unprecedented public good. The old tradition is the willingness of scientists and scholars to publish the fruits of their research in scholarly journals without payment, for the sake of inquiry and knowledge. The new technology is the internet. The public good they make possible is the world-wide electronic distribution of the peer-reviewed journal literature and completely free and unrestricted access to it by all scientists, scholars, teachers, students, and other curious minds. Removing access barriers to this literature will accelerate research, enrich education, share the learning of the rich with the poor and the poor with the rich, make this literature as useful as it can be, and lay the foundation for uniting humanity in a common intellectual conversation and quest for knowledge.

The recently announced new open access policy of two of India's science departments represents the best of funding agency open access policy to date and includes important advances. There is a focus on green or open access archives and a call to develop the institutional repository system to implement the policy. This will ensure that the results of research funded by India remains open access and remains available to Indians - there is no substitute in OA policy for ensuring local control. The maximum embargoes are six months in the sciences and one year in the humanities and social sciences. The major advance is inclusion of the San Francisco Declaration on Research Assessment instructing evaluators not to consider impact factor or other metrics in assessing the work of researchers, but rather focus on the quality of the work per se. This is an absolutely critical step in addressing the systemic dysfunction in the scholarly communication system I have described elsewhere (Morrison, 2012), facilitating a shift to rational rationality, a system that is free to prioritize the advancement of scholarly knowledge, the knowledge commons, rather than the imperfect measures people have devised as heuristic devices.

Morrison, H. (2012). Freedom for scholarship in the internet age.  Doctoral dissertation, Simon Fraser University, Department of Communication. The second chapter discusses the theme of irrational rationality, drawing from the work begun by Weber. This is also called instrumental rationality, and in brief is our tendency to develop tools, techniques and measures to help us achieve our goals, only to become slaves to the measures.

Posted by Heather Morrison at 3:56 PM No comments:

If you have news about the dramatic growth of open access in 2014 that you would like to share with others, please do so as a comment to this post. This year I'm skipping the usual early year-end edition due to lack of time, but the final year end (Dec. 31) will continue as usual. Please note that I may not be keeping up with of the usual social media for OA, so reader alerts via comments would be most appreciated.
Posted by Heather Morrison at 11:04 AM No comments:

According to a leak of the France-Elsevier deal, while France has cut $400 million Euros from the budgets of its academic institutions, at the same time the country secretly agreed to a 5-year $172 million Euro deal with Elsevier. That's a systemic annual budget cut of $80 million Euros and an Elsevier annual payment of $34 million Euros.

I don't have details about academic employment in France. However, assuming the same situation as in North America it is likely that this will primarily impact the employment prospect of new graduates in academia, and/or may cause some professors to accept early retirement. In effect, again assuming a similar situation, this means that many more new academics will accept very part-time, poorly paid positions with little or no benefits or job security than would otherwise be the case.

And that's at Elsevier rates - by my calculations, we can flip the current subscriptions system to one that is fully open access, and, if we're smart, at a small fraction of the cost - again by my calculations, the current average spend per article for the DIY academic publishing largely reflected in journals using Open Journal Systems - is $188 per article, just 4% of the world's global library annual spend per article in subscriptions journals. Redirecting this money to academic salaries could do a lot towards revitalizing universities.

If readers have citations to data on academic salaries and/or employment in France, that would be helpful.
Posted by Heather Morrison at 7:03 AM No comments:

To celebrate OA Week 2014, the Sustaining the Knowledge Commons team has released an early version of our  Open access article processing charges: DOAJ survey May 2014 for open commenting (until November 3, 2014) - details here: http://sustainingknowledgecommons.org/2014/10/20/open-access-article-processing-charges-doaj-survey-may-2014/
Direct link to the OA APC dataverse (open data) where select files from this project have been posted:  http://dataverse.scholarsportal.info/dvn/dv/oaapc

It is with great pleasure that I acknowledge that Canada's Social Sciences and Humanities Research Council has selected my proposal Sustaining the knowledge commons (open access scholarship) for funding in the amount of $71,000 Canadian for the period 2014 - 2016. This suite of research projects involves an open research approach; to facilitate sharing of knowledge in this area (both existing knowledge and new knowledge gained through this suite of research projects) I've created a new project blog, Sustaining the Knowledge Commons (open access scholarship) which can be found at sustainingknowledgecommons.org A summary of the research proposal has been posted on this new blog and is copied below for the convenience of readers of IJPE. Watch for more on this as the research unfolds.