The dramatic growth of PLoS One: soon-to-be world's largest journal 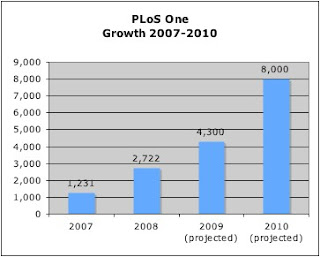 Update January 2011: in 2010, PLoS ONE published 6,749 articles, and the data strongly suggest that PLoS ONE is indeed now the world's largest journal. For details, see my January 2011 update.

On the world's largest journals

Other journals in the 'largest' category, with their 2008 article counts, are:

This post is part of the Dramatic Growth of Open Access Series.
Posted by Heather Morrison at 9:54 PM