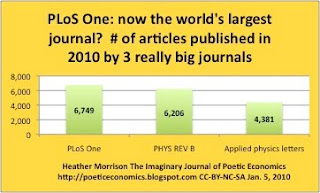 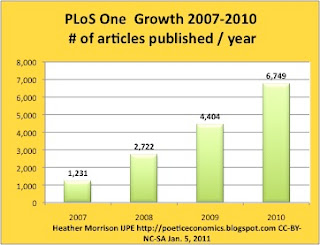 This post explores data strongly suggesting that open access journal PLoS ONE is now the world's largest journal. According to Pete Binfield (personal correspondence), in 2010 PLoS One published 6,749 articles. Based on listserv discussions in 2008, the world's largest journals at that date were PHYS REV B (5782 articles) and APPL PHYS LETT (5449 articles). As of today, a search for 2010 articles at the APS website yields 6,206 articles. A search for 2010 articles for APPL PHYS LETT in IEEE's xPLore service yields 4,381 articles.

So it is timely to raise the question: is the world's largest scholarly journal now an open access journal, PLoS One? If anyone has data that can help to illuminate this issue, please join the conversation started by Daniel Mietchen at Friend Feed, or send me an e-mail at hgmorris at sfu dot ca.

Methodology Note: this post is an informal brief research project, based on consultation with library and publisher experts on the size of the world's largest journals, presented for informal peer collaboration and academic critique. It is also an update of this post from 2009 projecting PLoS ONE as the world's largest journal in 2010. The number of articles published in 2010 in PLoS ONE is less than projected, but still apparently more than enough to make PLoS ONE the world's largest research journal. This post forms part of the Dramatic Growth of Open Access series.
Posted by Heather Morrison at 5:24 PM