Universal access to all knowledge will be one of humanity’s greatest achievements. We are already well on the way! from Stewart Brand's: Brewster Kahle's 30 November Long Now Talk  For fun and inspiration, check out the Internet Archive for the more than 3 million books (adding 1,000 titles per day), 100,000 concerts and 1 million recordings (3 new bands uploading / day), 600,000 movies, and of course the web itself. Thanks, Internet Archive and Brewster Kahle - and wow!

2011 has been another outstanding year for the growth of open access to scholarly resources. Highlights this quarter include the remarkable growth of the Directory of Open Access Journals, with an increase of more than 600 titles this quarter alone so far, for a growth rate of 9 titles per day. On November 26, RePEC reached a major milestone. There are now One million works available online through RePEC (Nov. 26, 2011). According to the Sherpa services blog,
60% of journals allow immediate self-archiving of post peer-reviewed articles
and the Open Access Directory just sailed past our 2 millionth view of the OAD.

From my perspective, open access has entered a new phase, one in which we are beginning to see the challenges of success.  How can we track all these resources and make it easy for people to find and use them? The emerging open access marketplace for commercial scholarly publishers appears to have attracted what Beall calls predatory open access publishers as I have commented on here and
here. As we begin to address these challenges, it is also timely to begin other overdue discussions, such as Dissension in the Open Access Ranks on CC Licenses.

Following are a few graphs illustrating the dramatic growth of open access over the past few years. 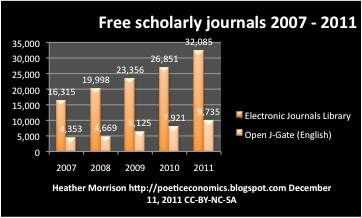 
Not all scholarly journals are peer-reviewed - not even subscription journals! From 2007 to 2011, the number of free journals of academic interest doubled from 16 - 32,000 as listed by the Electronic Journals Library, or 4, 000 to close to 10,000 English language journals as listed in Open J-Gate. 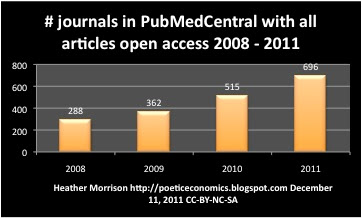 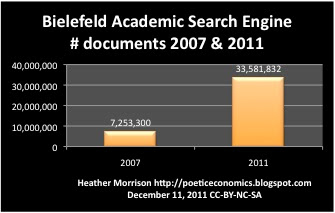 The number of journals contributing all articles as open access to PubMedCentral more than doubled from 288 to 696 from 2008 to 2011. 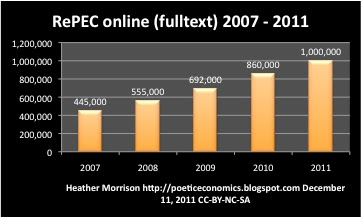 Even the mature RePEC more than doubled in size in the past few years, from 400 thousand online documents in 2007 to over a million today.


Posted by Heather Morrison at 6:30 PM