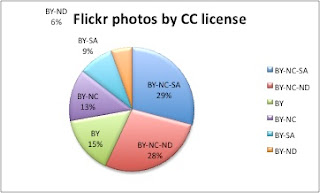 Congratulations to Creative Commons, celebrating its 10th birthday from December 7 to 16th! As of December 11, 2012, flickr contains close to a quarter of a billion CC licensed photos! flickr posts a list with the number of photos per license, which provides an opportunity to see which CC licenses are the most popular with flickr users. The two most popular licenses, accounting for more than half of the photos, are Attribution-Noncommercial-Sharealike (BY-NC-SA) (29%) and Attribution-Noncommercial-Noderivatives (BY-NC-ND) (28%). Of the CC license elements, the most popular by far is Noncommercial (NC). Over 173 million flickr photos - 70% of the flickr CC set - use NC. flickr CC licenses, in descending order based on use

The most popular CC license elements

For a description of the Creative Commons license elements, see the CC Licenses page.

Comment: this is particularly remarkable considering that the default CC license is CC-BY, and the CC license chooser deliberately tries to steer people away from NC and ND by labelling these as "not free culture" licenses. In other words, it takes effort to use these elements. If Creative Commons is meant to be a democracy, and if other communities using CC licenses show similar results, then NC should be the default. From my perspective, NC IS the free culture choice. This is the element that gives us a chance to share things and say that they do not belong to the realm of commerce.

This post is part of the Creative Commons and open access critique series.
Posted by Heather Morrison at 10:29 PM